ILLUMINE is the futuristic sounding name of a truly innovative project. A research group with a top-class line-up that includes MAN Energy Solutions has set the goal of developing an intelligent energy-management system to manage the future energy-needs of industrial applications.

The energy demands of industrial companies can be gigantic and are often on a par with the consumption of small towns. Take MAN Energy Solutions at its headquarters in Augsburg, Germany where the entire facility consumes 55 to 65 GWh of electrical power annually, and loads regularly peak at 15 MW – equivalent to the daily consumption of 3,000 households. For public grids, such sudden peaks in load can be challenging to handle, which is why the company operates a 5.4 MW gas-engine power plant to shave such spikes off the grid.

“Other, large, industrial companies have the same challenges as we do, or face even more complex energy-management needs. Traditionally, such companies ran thermal-power plants but, given the need to decarbonize, the question arises as to how to integrate renewable resources into the mix and how then to eventually replace fossil-generation altogether,” says Michael Raila from MAN Energy Solutions, Executive Assistant to Head of SBU Power Plants.

Integrating rising shares of renewables into a system, however, poses its own challenges: “Industrial plants need a stable energy supply at all times but wind and sun can be intermittent, which makes energy management a challenging task. Another effect of such volatility is highly dynamic energy-pricing – at least in the EU,” adds Raila. “Accordingly, companies will have to find a way to secure their energy supply and make the right economic choices. They’ll also have to take decisions both in the near-term and repeatedly – over and over – 24 hours a day.” 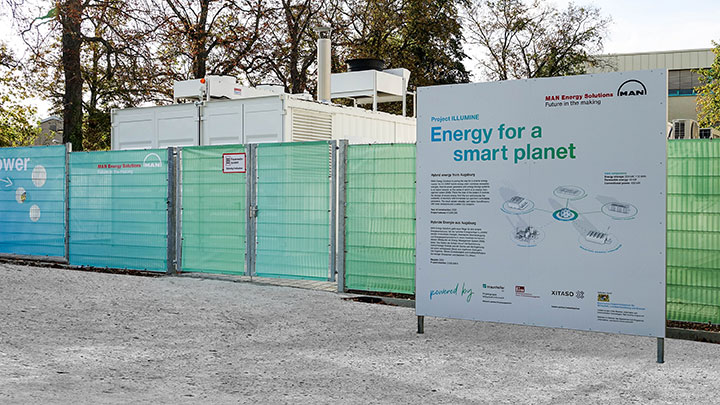 The ILLUMINE demonstrator: At MAN’s Augsburg site the project partners have installed a small-scale, hybrid power-plant to the energy-management system.

Inside the ILLUMINE demonstrator

To come up with a solution to intelligently master future industrial energy management, MAN Energy Solutions initiated the ILLUMINE research project. It did so with a number of partners, namely software development company, XITASO and the Fraunhofer Project Group Business & Information Systems Engineering, which is associated with the University of Augsburg, the University of Bayreuth as well as the Augsburg University of Applied Sciences. “We are working on an intelligent control system that helps to operate complex power-systems and chooses the most-efficient energy source at any time,” says Raila.

Since the project’s kick-off in early 2018, promising progress has been made. Already today, ILLUMINE has become even more than just code and smart algorithms. At MAN’s Augsburg site, the project partners have installed a small-scale, hybrid power-plant consisting of an MAN gas engine, a photovoltaic system and a battery-storage unit to put things to the test. The test facility can simulate various loads and operate in grid-parallel or island mode, enabling researchers to simulate more than 20 different application scenarios. In this way, the project team can test how to optimally operate the system components, how quickly the engine can react to fluctuations from the photovoltaic system, and at what point it makes sense to buffer any shortfalls with battery power.

Raila says: “Using a platform like ILLUMINE, it’s possible to operate a decentralized energy system that ensures stable operation while minimizing energy-generation costs at all times. Depending on the application, it may be more efficient to increase one’s own supply from renewables and to generate electricity in-house at peak times using gas engines in order to take the load off the power grid.”
20
different application scenarios can be simulated
15
minutes – time that ILLUMINE is looking into the future, based on data
500
data signals per second can be processed by ILLUMINE 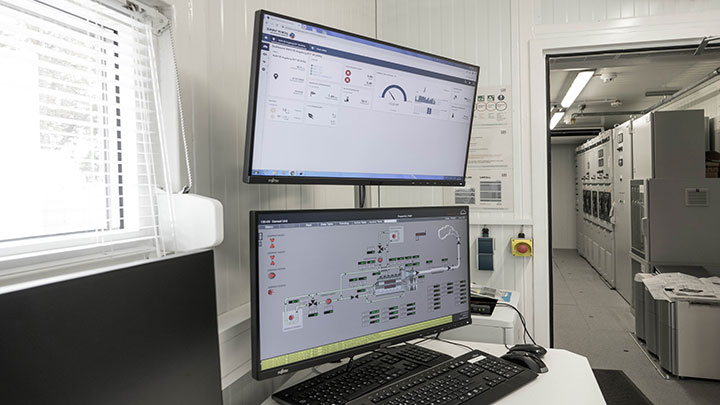 The core of ILLUMINE is an elaborate energy-management software.

At the heart of ILLUMINE is an elaborate, energy-management software, which is implemented by XITASO based on mathematical models from Fraunhofer researchers. “The ILLUMINE platform uses specifically developed, complex optimization-algorithms to control the energy supply and demand,” says Prof. Björn Häckel, who heads the project together with Prof. Hans Ulrich Buhl at Fraunhofer. “It’s able to process data from generators, solar-power systems, wind turbines, energy-storage devices, electricity markets and consumers for this purpose.”

For instance, in periods when electricity prices are high and weather conditions poor, ILLUMINE can fall back on power generation with gas engines or operate on battery-storage instead of drawing electricity from the public grid. Depending on the market price, it may even be economically viable to generate surplus energy and feed it into the grid.

Prof. Häckel adds: “We need a software platform that can not only forecast how the energy price and weather will develop in the short term, but also how production processes and the energy supply can adapt to it.”

This requires highly flexible and fast-reacting software: “The response time of our energy-management system is between three and four milliseconds,” says Dominik Spaun from XITASO. “This means that the software is able to receive, process and send up to 500 data signals per second, and is capable of communicating with the connected components in near-real time.” Up to six software experts from XITASO worked on the software whose overall development took three years. “Software is like a living organism and needs to develop further along with the changing environment and new user-requirements,” adds Spaun. “We have built the software with a highly flexible architecture to enable operation with various component set-ups. This enables predictions, based on intelligent optimization, that foster a self-optimizing system.”

Intelligent energy-management systems like ILLUMINE can take the energy transition to a new and much smarter level by establishing algorithms that optimize energy costs, while ensuring stable operation increasingly based on renewable energy. “By 2050, we aim for complete renewable and carbon-free energy generation. To achieve this, we need smart digital technologies to help balance supply and demand,” says information systems expert, Häckel.

A proof-point for decentralized generation

Already ILLUMINE is enabling researchers to carry out test-runs under real conditions and continuously improve the system’s algorithms. Upon the research projects conclusion in spring 2021, MAN Energy Solutions plans to continue operating the pilot plant to demonstrate the advantages of an intelligent energy-management system to customers. Michael Raila concludes: “Many of our customers are very interested in integrating renewable energies and energy-storage into their grids, but they often have concerns about the practicalities and economic benefits. By building and operating ILLUMINE in Augsburg, we have proven its technical feasibility and now invite our customers to convince themselves directly on-site. Ultimately, we plan to develop the first large-scale application of the system in collaboration with a customer.”

An MAN gas engine jumps in when the sun doesn’t shine.

Hybrid energy from Augsburg with ILLUMINE as an intelligent control system

At MAN Energy Solutions, we are convinced that a sustainable and stable energy supply can only be ensured through a smart combination of renewables, energy storage and reliable backup systems such as gas engine power plants – all controlled by autonomous energy management software.